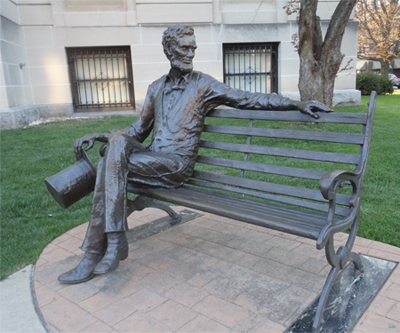 Where Lincoln did business and where the Republican Party came into being . . .
Where Adlai Stevenson walked . . .
Where State Farm Insurance and Beer Nuts were started . . .
. . . and Mother Jones confronted the “scabs”.

The area of today’s Downtown Bloomington was at the edge of a large grove enjoyed by the Kickapoo people before the first Euro-American settlers arrived in the early 1820’s. Early settlers called it Blooming Grove. When the County of McLean was incorporated on December 25, 1830, a county seat was established, Bloomington. However, they didn’t know where it was to be located. James Allen, who was one of the promoters of the new county, offered to donate 60 acres for the town. His offer was accepted Bloomington was laid out and its lots sold at a big party on the 4th of July 1831.

Roads were few but rich soils brought new farmers who conducted business at the little county. People came to trade and do business at the town’s center, known today as Downtown Bloomington. The Springfield lawyer, Abe Lincoln, rode the circuit to Bloomington and conducted business from the now restored Miller-Davis building (101-103 N. Main Street). Here Lincoln made friends including lawyers and prominent businessmen. According to Carl Sandburg, the noted Lincoln biographer, it was in the building at 106-108 W. Washington that Jesse Fell first encouraged Lincoln to run for president. The meeting resulted in Lincoln writing his autobiography that Fell distributed to the Eastern press, thus introducing Lincoln to the national political scene.

Structures at 116-118 W. Washington housed the offices of Lincoln’s friends. Center Hall, 111-113 N. Center Street, was the site of Lincoln’s “Inventions and Discoveries” speech, which played to an empty house in the period after Lincoln lost his senate race against Stephen A. Douglas. Most notable was Lincoln’s “Lost Speech” which galvanized the Republican Party. The speech was so named because the speech was never fully reported. It is thought that Lincoln went well beyond his then cautious approach on the issue of slavery. Sadly, Majors Hall, which housed this event was demolished in 1959. Lincoln would recognize much of downtown, including the rounds block and the restored bank building of his backer, Asahel Gridley.

At the turn of the century (1900) a disastrous fire claimed a great portion of the downtown, especially the north and east of the courthouse. The burnt area was quickly rebuilt from the designs of local architects George Miller, Paul Moratz and A.L. Pillsbury. Luckily most Lincoln sites were spared. Agriculture, highways, railroads, and insurance influenced continued growth. The downtown became a regional shopping center attracting trade from adjoining counties. Labor unions grew in strength.

In 1917 Mother Jones addressed striking streetcar men who stopped trolley service in protest of wage cuts. The National Guard was brought into the downtown to squelch the strike. In 1926 U S Route 66 was built along the Chicago & Alton Railroad corridor, bringing business and tourists through the heart of Bloomington.

The downtown flourished as the center of commerce, and the McLean County Court House served as a landmark for the bustling city. State Farm Insurance Company began to sell car insurance in the downtown at the former Market House on the northeast corner of Monroe and Center Streets. Later, the company built the tall Home Office building on the Square. Today State Farm continues to do business at this location. At 415 North Main Street the Shirk family ran the Caramel Crisp shop, the beginnings of the internationally famous Beer Nuts Company.

Downtown retains much it its nineteenth century charm of great old buildings, which have been restored, and a friendly people on the streets who will take the time to say hello.

Several famous people were from Bloomington – three Illinois governors, Supreme Court Judge David Davis, and Adlai Stevenson , Vice President of the United States under Grover Cleveland. His grandson, Adlai Stevenson II, served as Governor of Illinois and was candidate for US president losing to Dwight Eisenhower in 1952 and 1956. Later Adlai ,II served as the United States Ambassador to the United Nations in the early 1960’s under John F. Kennedy. Actor McLean Stevenson, of the popular TV show “Mash” in the 1960’s and 70’s, made the downtown store Moberly& Klenner’s famous through his gag about measuring trouser inseams.

In the 1960’s and 70’s, changes occurred when two outlying malls became the retail hub of the city. The new I-55 superhighway not only replaced Route 66, but bypassed the city’s core in favor of the outskirts. Like so many other cities, downtown business declined. Now a rebirth permeates the air as the downtown redefines itself. We see both new structures added to the skyline and old buildings undergoing external and internal renovation. The Downtown Bloomington Association is busy working with the City of Bloomington to create and implement a Downtown Development Strategy-a blueprint for development over the next 10 years.

Today the composition of the Downtown features a legal and professional scene, a cultural district, a large community of artists, galleries, a history museum, governmental and judicial bodies, bars and musical entertainment, restaurants, retail shops, service providers, and a residential community.